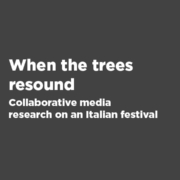 When the Trees Resound is the result of an extremely interesting and innovative project of collaborative multi-media research on the Maggio, the most notorious Italian tree festival that takes place yearly in the small village of Accettura, near Matera, in the South of Italy. The Maggio is one of several tree festivals, seventeen of which are currently active in the regions of Basilicata and Calabria, which usually consist of pairs of trees being felled, transported to town, re-erected and becoming part of complex rituals that have ancient pagan roots, combined with religious rituals and meanings. One of the core ideas celebrated is that of a wedding between the trees, symbolising the union of the people, the relationship between humans and nature, humanity and deity, and more.