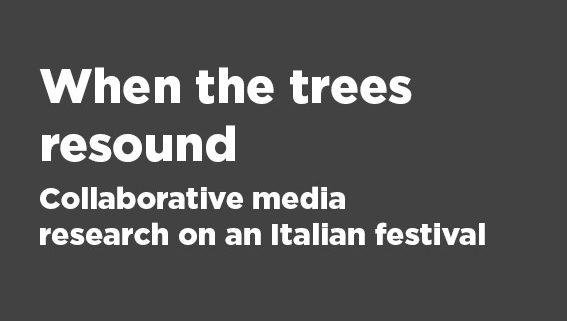 When the Trees Resound is the result of an extremely interesting and innovative project of collaborative multi-media research on the Maggio, the most notorious Italian tree festival that takes place yearly in the small village of Accettura, near Matera, in the South of Italy. The Maggio is one of several tree festivals, seventeen of which are currently active in the regions of Basilicata and Calabria, which usually consist of pairs of trees being felled, transported to town, re-erected and becoming part of complex rituals that have ancient pagan roots, combined with religious rituals and meanings. One of the core ideas celebrated is that of a wedding between the trees, symbolising the union of the people, the relationship between humans and nature, humanity and deity, and more.

This interdisciplinary publication, edited by Nicola Scaldaferri and Steven Feld, with an introduction by Lorenzo Ferrarini, includes essays, dialogues, interviews, photographic collections, and two audio CDs. It is an updated English version (edited by Ferrarini) of the original publication of this work, which appeared in Italian in 2012. This new version, which is freely available online along with all audio tracks, presents some additional materials, including three interviews, which provide additional voices on the festival and on the reception of the original publication.

The methodology of interdisciplinary fieldwork is inspired by the Italian scholar Ernesto De Martino, a philosopher, historian of religion, and ethnologist who carried out pivotal research in the 1950s in the south of Italy by setting up a team comprised of a psychologist, an ethnomusicologist, an anthropologist, a photographer, a filmmaker and a medical doctor. The ethnographic research leading to When the Trees Resound, coordinated by Nicola Scaldaferri, was conducted by a team that included anthropologists, ethnomusicologists, and photographers. One of the aims of the project was to focus on sound as an essential element of the Maggio, documenting the sonic dimension through an extraordinary collaborative effort and reflecting on it from multiple perspectives, in order to produce a rich and multifaceted representation of this complex tradition in Accettura. The members of this varied team worked together, navigating the unfolding of ritual events, and ultimately complementing each other during the culminating four days of the festival that took place in 2005.

The audio recordings were made by Fabio Calzia, Steven Feld, Cristina Ghirardini, Elisa Piria, Guido Raschieri and Nicola Scaldaferri: multiple ‘ears’ with the mission of capturing the countless details and perspectives of the sounds of nature, music, people, and ritual. These were supplemented with archival materials by Don Giuseppe Filardi and Nicola Scaldaferri. The first CD of the publication is a soundscape composition created by Steven Feld, which provides six tracks that, in chronological order, present sonic impressions of the four days documented. The audio editing is based on selection, compression of time, and layering of materials, resulting in a highly evocative and immersive experience. The second CD presents a systematic overview of the musical practices that are heard during the festival. The 25 tracks include prayers, walking band performances, songs accompanied on organetto (diatonic accordion) and zampogna (Italian double-chanter pipe), instrumental pieces featuring tamburello (frame drum), zampogna and ciaramella (Italian traditional double reed instrument), and folk ensemble pieces – all of which show the variety of musical materials hosted in this tradition.

The two photographic sequences provide two parallel and, as with the two CDs, complementary perspectives on the festival. Stefano Vaja delivers a systematic documentation of all significant aspects of the tradition through to the culminating moments. Lorenzo Ferrarini chooses instead a more interpretative approach to photography, focusing on selected themes and details, realising a more evocative portrait. Both contributions alternate black and white and colour photography and are extremely valuable, providing deep and inspiring visualisations of the Maggio.

Four short essays by Nicola Scaldaferri, Giuseppe Filardi, Stefano Vaja and Ferdinando Mirizzi provide details and context of the tree ritual of Accettura, with reflections on the Maggio through history, photographic representations, and anthropological writing. The dialogue on ‘Sound and Documentation’ between Steven Feld and Nicola Scaldaferri is a key contribution, in that – among other interesting reflections – it unveils the genesis of ‘this unique collaborative experiment in representation with two contrasting CDs’ (When the Trees Resound: 81). The choice of delivering this as a transcribed conversation between the two scholars is very appropriate, reminding us that the idea of dialogue is central to this project. There are multiple threads, intersections and conversations that can be traced while going through this multi-media publication: from the interdisciplinary collaboration among researchers, to the encounter and developing relationship of the team with the population of the festival; from the contrasting characterisation between the two pairs of contributions on the sonic and photographic domain, to the connections between the textual, sonic and visual perspectives.

The three interviews carried out by Nicola Scaldaferri in 2014 provided the opportunity of adding to this edition valuable new perspectives from Biagio Labbate (engineering student and musician), Antonio Trivigno (photographer who has been documenting the Maggio since 1978), and Giuseppe Filardi (resident priest of Accettura and contributor to the research and to the volume). While the first two interviews provide feedback on the reception of the book, and in particular of the soundscape composition, the conversation with Giuseppe Filardi focuses on the topic of a 2014 convention about the connection between the musical piece Accettura, composed by Riccardo Malipiero, and the forty abstract canvasses by painter Ernesto Treccani that inspired Malipiero’s music. The dialogue between Filardi and Scaldaferri provides interesting reflections on the relationship between the sonic and the visual dimensions, which is central to the When the Trees Resound project as well.

This publication makes a significant contribution to the theories and methods of investigation of ritual traditions, providing a successful project of collaborative ethnographic research with a strong focus on sound, complemented by photography. It is a remarkable document that captures in unique ways the complexity of the Maggio of Accettura, and is a valuable contribution to the field of audiovisual ethnomusicology and beyond. This book can be read in many different ways. A progressive reading of the text contributions delivers a very organised sequence that opens with an introduction to the festival and to the ethnographic project, leading on to a deeper understanding of the literature. The two photographic sequences and the transcribed conversations offer a strong visual impression of the places and the people. Finally, the CDs, accompanied by introductions and detailed track content lists, bring us into the auditory dimension and we discover much more about what we have read. At the end of such a journey, one may realise that it is time to go back to the CDs, this time perhaps to listen while looking through the photo sequences. The best approach though, is probably to start with the first item you discover when you flip the front cover: the CD of the soundscape composition, a wonderful and creative synthesis of this project in the domain of sound.